Ajmer Ziyarat Guide for in the regional language of Malayalam released

Ajmer: The first one of it’s kind Ajmeer Ziyarat Guide in the Indian regional language, Malayalam was released by Syed Salman Chishty, chairman Chishtiya Foundation in a function at Chishty Manzil Sufi Khanqah.
Syed Salman Chishty said that a handbook for specially dedicated to visitors of Ajmer hailing from a certain part of the country is valuable effort. Khwaja Ghareeb Nawaz is the spiritual sultan for all the human souls in Indian subcontinent, which is why it is a necessity for people to study his biography and Chishty Sufi path with much needed knowledge of Dargah premise at Ajmer Shareef. A Malayalam handbook which was planned by late Quthubuzzaman Shaikh Sufi Muhammad Yusuf Sultan and Shaikh Mohammad Bava Ustad is prepared by their desciple journalist and Sufi Author PC Abdul Jaleel mahbubi has been released now for the public.
The function was attended by a delegation of sulthaniya foundation and Sufi Academy Kozhikode. In collaboration with international institute of ibnarbi thought and chishtiya foundation a big sufi education program is also ready for being designed in the discussion with Syed Salman Chishty.
Saheer Ghazali Banglore, Zainul Niyas Ghazali wayanad, Haseeb Abdul Latheef Sharjah, Nisar EK Calicut, Shaheen Sultani,Akber Sultani, Mohammad Juraij Calicut were the others who joined the delegation. 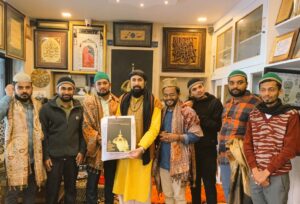