Kazakh painter, a victim of nuclear radiation, is world renowned for his work on nuclear tests and its human cost

New Delhi : Karipbek Kuyukov, the world-renowned Kazakh painter, who paints with his lips and toes being a victim of nuclear radiation, is showcasing his work at the Kazakh Pavilion at Expo 2020 Dubai. a World Expo, currently hosted by Dubai in the United Arab Emirates from 1 October 2021 to 31 March 2022. Handless Kazakhstan artist, who paints pains of nuclear radiation victims at Expo
The artist creates his stunning works using his lips and toes as he doesn’t want his disability to define him and prevent him from practising his art to show the world the devastation nuclear can cause.
Kuyukov’s paintings are part of private and public collections world over, and he is the only artist in the world whose creativity focuses on the topic of nuclear tests and the Semipalatinsk test site, also known as `The Polygon,’ the Soviet testing site for nuclear weapons.
“Kuyukov’s art is a symbol of the anti-nuclear era of Kazakhstan, and the universal message of humanity and peace his works reflect has been attracting thousands of visitors to the Kazakh pavilion,” said Yerzhan Yerkinbaev, the Vice Minister of Culture and Sports of the Republic of Kazakhstan, in charge of Tourism.
His paintings are an open window to the miseries of people, many of them whom he knew from his childhood, who suffered from nuclear radiation, invoking human pain, doom, fear and powerlessness.
Kuyukov is an ardent advocate of a nuclear free world, and is an ambassador of the international Atom movement. He was also an activist of the Nevada-Semipalatinsk movement, created in 1989 by the famous poet, writer, diplomat and public and political figure of Kazakhstan, Olzhas Suleimenov.
Talking about his life devoted to the struggle for the peaceful life of his homeland, Kuyukov believes that he inherited his resilience and patience from his parents.
“Sometimes I wonder how many challenges one person can withstand, and the more fate tests us for strength, the more we need to resist,” the artist have been quoted saying.
Nuclear tests and their disastrous consequences on human health and life is one of the leading themes in Kuyukov’s work. He was born in a small Kazakh village, located 100 kilometers from the Semipalatinsk polygon. During 42 years of experiments more than 450 explosions of various intensities rocked the place. Thirty years ago, Kazakhstan initiated a large-scale anti-nuclear movement and was the first in modern world history to forever abandon nuclear tests and developments for military and peaceful purposes. On August 29th, 1991, by the decree of the First President of the country, Nursultan Nazarbayev, the Semipalatinsk test site was closed. 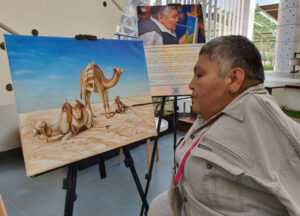 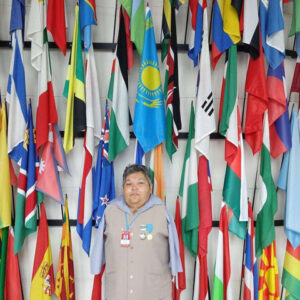