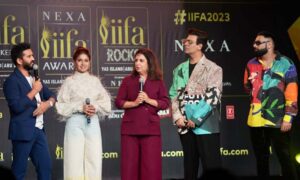 The highly-anticipated event is being held in collaboration with the Department of Culture and Tourism – Abu Dhabi (DCT Abu Dhabi), and Miral, Abu Dhabi’s leading curator of immersive destinations and experiences. NEXA continues its partnership as the title sponsor for the seventh consecutive edition. Salman Khan has been a part of the IIFA family for over two decades now. “I am glad to be going back to Yas Island, Abu Dhabi. Last edition, I hosted the awards with Ritesh Deshmukh and Maniesh Paul and made everyone present not just laugh, but cry too as I opened my heart to them. This time, I promise to make them stand up and dance with me as we celebrate Indian cinema globally,” he asserted.
The IIFA stage will also be lit up with the best of *Varun Dhawan*. The versatile actor who won trophies in 2015 and 2017 for performance in a comic role, is delighted to perform for the third time. “IIFA for me is an unmissable experience and I can’t wait to be back in my favorite city. It’s a stage that allows me to connect with fans from all over the world and I am going to ask them watch out for the Bhediya, he is not going to let them get away,” the actor quipped drawing appreciative laughter for his tongue-in-cheek humour. Also in attendance at the media interaction was *Farhan Akhtar*, who will be taking over the baton from Salman Khan. Farhan will co-host the IIFA Awards with Abhishek Bachchan and Maniesh Paul. “I have been fortunate to be felicitated by IIFA in a number of categories, from best debut to best actor, best-supporting actor, best director, best story, best screenplay and best film. It gives you the biggest audience and I am looking forward to engaging with and entertaining them in a new role,” an ebullient Farhan shared. 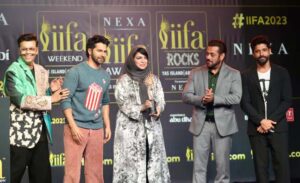 Co-host *Maniesh Paul* was equally gung-ho. “Last year, I hosted the IIFA Awards with Bhai (Salman Khan) and Riteish (Deshmukh). It was a blast! This year, it’s going to be as enjoyable, with Farhan and Abhishek. All glitz and glamour, laughter and hungama, talent and trophies aur hamara karnama, a night to remember,” he promised.
“I have globe trotted with IIFA for several years and I’m super happy to rock the IIFA stage with Farah, next year in February. Naach, gaana, action, drama, IIFA Rocks is a surefire blockbuster every time!” Karan Johar said.
Farah hosted IIFA Rocks this year with Aparshakti Khurrana and she can’t wait to be back in Yas Island. “It’s one of my favorite places, IIFA is one of my favorite award shows and Karan is one of my favorite people even though he is always going Toodles on me. If you enjoy our Insta reels, make sure you catch us live, double dhamaka hoga as the world dances to our tunes,” she assured.
For Badshah, IIFA Rocks underlines Bollywood’s supremacy in the world of entertainment. “The phenomenal response to this live music concert every year across the globe underlines the popularity of Indian cinema and its music. And I can’t wait to rule this stage, bring it on!” he roared. Nucleya pointed out that “there is a reason why IIFA is called the Bollywood Oscars and IIFA Rocks is the pre-Oscar event, not to be skipped. It’s taken Hindi cinema, its music, dance and fashion, across the globe. Twenty-two years and going strong. It’s been a journey of only highs!” he stated to thunderous applause.
Sunidhi Chauhan, the youngest IIFA nominee, reminded us that IIFA has grown from one starry night to a three-day extravaganza. “It is getting bigger every year, and still the heart wants more. And with IIFA Rocks, we will give you more!” she assured.
Amit Trivedi endorsed the opinions of his fellow participants, saying, “When we talk of hearts beating in sync, let me remind you that this time IIFA Rocks is bringing Valentine’s Day to you early. If that isn’t reason enough for a deluge of love, what is! IIFA is not just another stage, it’s a night to be lived and a memory to live with,” he emphasizes.
The forthcoming edition of IIFA Rocks – the biggest musical extravaganza will be hosted by Karan Johar and Farah Khan. It will feature live acts by several big names, including singer-composer Amit Trivedi, rapper-singer Badshah, singer Sunidhi Chauhan and electronic music producer Nucleya.
The IIFA Weekend and Awards is back at Etihad Arena on Yas Island, Abu Dhabi, for the second time. *Nouf Al-Boushelaibi, Director of Strategic Marketing & Communications at DCT Abu Dhabi*, underlined the emirates strategic alliance with the Indian market and its bond with the Bollywood fraternity and industry: “We are excited and honoured to welcome the phenomenal IIFA awards show to Abu Dhabi for the second year in a row. With colour, movement and on-screen magic, the IIFA weekend is a joy-filled celebration of Indian cinema. As we proudly host this vibrant weekend on Yas Island, Abu Dhabi, we are bringing Indian celebrities and filmmakers closer to our residents and our visitors from around the world. Both countries share a deep passion for heritage and hospitality, and it is the richness of this cultural exchange that we celebrate as we invite visitors to experience Abu Dhabi.”
Taghrid AlSaeed, Executive Director of Group Communications and Destination Marketing, Miral*, also believes that the partnership with IIFA will strengthen the bonds between India, Abu Dhabi and the United Arab Emirates (UAE): “It will give a boost to trade, tourism and film production opportunities with Yas Island reinforcing its claim as the fast-growing global entertainment and leisure destination, as well as an international events hub,” she explained.
Mr. Shashank Srivastava, Senior Executive Officer, Marketing and Sales, Maruti Suzuki India* said, “NEXA has always been at the forefront of innovations and Curating Impeccable Experiences that not only Impress but Inspire. By foraying into the fields of Fashion, Music and Journeys, NEXA has successfully created and inspired multiple unique experiences for its customers. It is for this very reason that NEXA has collaborated with IIFA, which is a platform to recognize India’s top creative talent in the world of cinema and celebrate the best in cinema arts. The association is in its 7th year and both NEXA and IIFA are challenging the status-quo to create experiences that are unique and inspiring.
With IIFA, we have a perfect association as we share a common vision of creating global experiences, which has established the premium imagery of both the brands. We look forward to IIFA 2023 which will be held at Yas Island in Abu Dhabi to inspire our new-age consumers who seek global experiences in their everyday lives.”
Commenting on the event, Nishant Pitti, CEO & Co-Founder, EaseMyTrip.com* said, “We are thrilled to be associated with IIFA once again for its 23rd edition. IIFA Awards are one of the most celebrated events in Bollywood and across the globe. It highlights the best of Indian cinema giving the ultimate entertainment experience globally. As the official travel partner, we endeavour to offer an unmatched experience to each and every one who is going to be a part of this once-in-a-lifetime event. We are going to offer special packages to ensure Bollywood fans from India and the Middle East regions can enjoy the celebrations in Yas Island, Abu Dhabi, UAE. 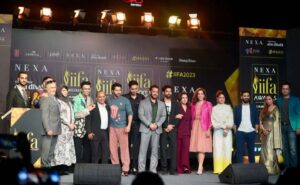