MAKEUP is a way for a woman to look and feel beautiful like herself, only prettier and more confident – Meenakshi Dutt

Mumbai: Meenakshi Dutt is a makeup queen who rules the makeup industry and creates magic with her work and makes everyone spellbound with her extraordinary talent. Optimally praised in India and around the globe with her modernized magic and establishment for style and beauty totally follows PERFECTION. Her passion and love for flawless makeup no doubt makes her stand out exceptionally and unmatched in the industry.

Ramps were hers to stamp as the queen defeated the Miss Delhi and Miss Navy Queen beauty pageants, beautifying her existence as a professional model in 1988. Briskly moving along as a highly sought-after a television anchor and model, the makeup queen Meenakshi Dutt steered uphill, culling out the career of a magnificent makeover expert and stylist in 1997.

Since 1997, Meenakshi Dutt has spilled the magic bestowing unparalleled beauty upon countless women. Her creativity and eccentric ideas in this field have Bollywood and Hollywood looks come approaching for Red Carpet events. Her gaga and knack for makeup and creativity have always kept her talent in the limelight shedding all the attention, cameras and lights upon her from every sphere.
She has also been associated with numerous projects around the globe. Photoshoots, television and print advertisements, music videos, fashion shows, launches, tv talk shows had the glimpse of the makeup queen everywhere. Enhancing and bringing about the best in every face she makes every woman in the country look no less than a princess especially on her wedding day mastering in Bridal make-up and hairstyles. Meenakshi Dutt is the most trusted name and is preferred by the leading fashion designers, photographers, and modeling agencies today. And the utterance of the word Bridal makeup does spout out the name Meenakshi Dutt itself. 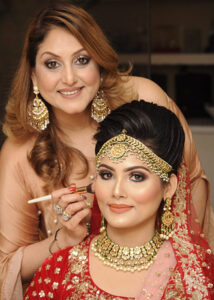